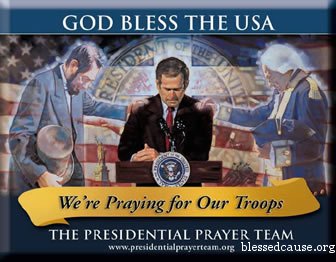 President Bush is walking a tightrope, he knows our country has a knife to its throat, he's making decisions based on information he couldn't possibly distribute without sacrificing the lives of those who are supplying that information.

Remember the first year that Bush took office, and his personal staff began quitting and going home to be with their families? People spend their whole careers striving to work in the White House, these people were top level. And what did they do? Quit to go home and be with their families. Why? It's obvious, they saw first hand the serious danger, the real reports with full disclosure, and their parental protective instincts took over.

Meanwhile, Democrats, American Islam and liberals are staging anti-war protests, all with their own political agendas. And Americans are being duped into going along with it.

I don't want war. I'm a mom with three sons, one who is 18. I don't want them to go to Iraq to be exposed to chemicals and horrible deaths. But if we allow evil to overtake control of the world, this life won't be worth living, not for my sons and not for my future grandchildren. I don't have enough information to weigh what must be done. Only President Bush does. PRAY FOR HIM.

America doesn't know the difference between right and wrong any more. Anti-war protesters believe we can give a flower to evil seeking people like Saddam Hussein, Osama bin Laden, Satan himself, and hugs and peace will be returned. The spirit of the Antichrist has been unleashed as has the spirit of deception. "Embrace white witchcraft, embrace homosexuality, embrace sorcery, atheism, paganism, embrace while defiling the land, then blame God when the plagues are unleashed and the death toll climbs." That's the plan of Satan, and many Americans, like a bunch of goats, are following right along.

So many reject Jesus Christ as the Good Shepherd because they don't like to think of themselves as sheep. But we already are just sheep and goats. America, we're grazing in poisonous pastures and we don't even know it. Christ calls out to us even today, but the further we go the blinder we become. Putting our faith in plastic and duct tape, rather than our All-Powerful Creator, El Shaddai, Eloheim, Adonai. May God have mercy on our nation.

The internet is flooded with conspiracy theories as though presidents are cloned carbon copies with the same conspiracy plan, when obviously nothing could be further from the truth. In order to believe these paranoid theories put out by democrats, one would have to believe that Bush and Clinton et al were cut of the same cloth.

The ONLY principality capable to orchestrate world events in darkness is the "prince of this world," Satan himself, and its not President Bush that he's working like a puppet, it's the masses rising up in hatred of America, hatred of Christians, hatred of Islam, hatred hatred hatred. And the slow crumbling corruption of America because of its peoples' demand to pander to all of our childish lusts and materialism. I wonder if President Bush doesn't look at the anti-war protesters like a screaming baby, demanding they have their bottle despite the fact that a murderer is breaking into the house. We certainly act like screaming demanding babies, can anyone love us like a father can? Yes, but not President Bush, only our Father in heaven, who calls out to us still.

Now would somebody please give Clooney, Daschle, Sarandon and Penn a bottle so they'll quit their crying? There is a murderer trying to break in. The President has a job to do.